You are here: Home › Who We Are

Michael is a Ph.D. Candidate in the School of Environmental and Forest Sciences at the University of Washington. Having completed a tree growth and climate-focused Masters degree in Ecosystem Analysis at the College of Forest Resources (UW) in 2004, Michael worked as a Research Scientist for World Wildlife Fund’s (WWF) International Climate Change Program for nearly 5 years. While working for WWF, Michael was responsible for ensuring that WWF’s conservation work not only considered the impacts of climate change, but also include appropriate adaptation planning. Michael is now focusing his research on (1) a climate vulnerability assessment, assessing the sensitivity, exposure, and adaptive capacity of key tree species in the region and (2) improving empirical models of vegetation distributions by incorporating mechanistic models. Additionally, Michael is managing the Climate Change Sensitivity Database.

Elizabeth Gray is a Global Climate Change Fellow at The Nature Conservancy. Her work focuses on translating climate change science to natural resource managers and high level decision-makers to improve management of natural systems and species. Currently, Dr. Gray is leading The Nature Conservancy’s involvement with the Pacific Northwest Climate Change Vulnerability Assessment. In addition, she leads strategic planning and training sessions in Tanzania, East Africa, with a focus on empowering local communities to sustainably manage their own resources through effective climate adaptation strategies and actions. Elizabeth earned a Ph.D. at the University of Washington and a B. A. at Harvard University.

Jesse earned an undergraduate degree in Geography from the University of Texas in Austin in 1999, and has worked as a geospatial technology professional for a variety of state and municipal government agencies. Previous to joining the Landscape Ecology and Conservation Lab, he worked as a Conservation Information Manager for the Nature Conservancy’s Washington program for 7 years.  For his Master’s thesis research, Jesse is studying the impact of climate change on terrestrial vertebrate species distributions, and investigating changes in habitat suitability and bioclimatic variables in protected areas.

Josh Lawler is an associate professor in the School of Environmental and Forest Sciences at the University of Washington.  His research addresses questions about how species and ecological systems respond to human activities and how policies, conservation efforts, and management actions can promote functioning systems.  Much of his current work involves modeling the responses of animal species and populations to land-use and climate change and developing climate change adaptation strategies for human and natural systems.  Dr. Lawler leads the research team at the University of Washington working on several aspects of the Pacific Northwest Climate Change Vulnerability Assessment.

For the Vulnerability project, Julia is planning and organizing a series of Climate Adaptation Workshops in selected case study regions in the Pacific Northwest. Julia is a Ph.D. student in the Interdisciplinary Urban Planning and Design Program. Her area of interest is in advancing the field of ecological planning with the goal of building ecological resilience into landscape planning and management.  Her Ph.D. research focuses on developing an empirical understanding of how urbanization and landscape patterns influence seed dispersal processes and forest regeneration. She received her M.S. in Sustainable Development and Conservation Biology from the University of Maryland and worked as a conservation planning associate for Defenders of Wildlife before beginning her Ph.D. at the University of Washington.

Dr. J. Michael Scott received his B.S. (1966) and M.A. (1969) degrees in Biology from San Diego State University, and his Ph.D. in Zoology (1973) from Oregon State University. From 1974 to 1984, Dr. Scott served as a Research Biologist for the U.S. Fish and Wildlife Service at Mauna Loa Field Station, Hawaii Volcanoes National Park.  This was his first assignment with the U.S. Department of Interior.  He continued his work with that agency when he left Hawaii in 1984 to serve as Project Leader of the Condor Research Center in Ventura, California.  In 1986 he was appointed by Interior as Leader of the Idaho Cooperative Fish and Wildlife Research Unit in Moscow, Idaho, and Professor in the Department of Fish and Wildlife Resources at the University of Idaho.  Dr. Scott retired from the U.S. Department of Interior in 2011 as a Senior Scientist.  He currently is University Distinguished Professor at the University of Idaho, Moscow Idaho.

Bruce Thompson is a Section Manager in the Wildlife Diversity Division with Washington Department of Fish and Wildlife (WDFW) in Olympia, Washington. Bruce’s academic background in wildlife science and natural resources include a B.S. from University of Wisconsin-Stevens Point, M.S. from Oregon State University, and PhD from Texas A&M University.  He was a commissioned officer in the U.S. Marine Corps.  His work has primarily been directed at integrating conservation strategies, GIS applications for landscape-scale conservation planning, and conservation communication.  He is married to a former public school science teacher and has 2 grown children, a son who is a Navy jet pilot and a daughter who is an engineer with Boeing Corporation.

Chad is interested in the impacts of development and climate-change on wildlife populations.  He uses technology, such as remote sensing and computer modeling, to address broad scale ecological problems.  Previously, Chad simulated the impacts of land-use, climate-change, and management on the endangered black-capped vireo.  He also studied bird communities in shaded cacao and banana agroforests in Costa Rica.  Chad earned a a Ph.D. in Landscape Ecology at the University of Washington, a M.S. in Conservation Biology and Sustainable Development at the University of Wisconsin-Madison, and a B.S. in Biology at the University of Puget Sound.

John Withey is an assistant professor in the Department of Biological Sciences at FIU, in Miami. He was a postdoc in Dr. Lawler’s lab from 2009-2011 and helped develop and plan the Climate Adaptation Case Studies funded by the North Pacific and Great Northern LCCs. Dr. Withey has attended the workshops for the Pioneer-Craters and Columbia Plateau landscapes and will help write the case study reports, as well as communicate feedback from workshop participants to the Vulnerability Assessment team. He earned his Ph.D. from the UW’s College of Forest Resources in 2006, and his current research interests include integrating land-use and climate change modeling to better evaluate projected impacts on native species and ecosystems. 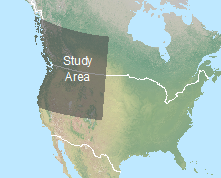 In response to the potential challenge that climate change poses to natural resource managers, the University of Washington has partnered with key collaborators in the region to conduct a climate change vulnerability assessment of an area spanning the Pacific Northwest region of North America. This assessment will provide resource managers and decision makers with some of the most basic and important information about how species and ecological systems will likely respond to climate change. It will also allow researchers to answer important scientific questions regarding the potential impacts of climate change on natural resources. Learn more...